Two major rug producing areas in Central Asia are the Caucasian and Turkoman regions, which are justifiably famous for the high quality weaves of their nomadic tribes. The Caucasus is a difficult mountain area between the Caspian and Black Seas and, although the region now belongs to the USSR, it has been home to many different tribes from Turkey, Armenia and Persia, all of which have contributed to its heritage. Caucasian rugs produced in this area are strongly geometric, with figures, birds and flowers reduced to straight lines. Turkestan covers the region between the Caspian and north-western China, and the rugs made by the various Afghani, Baluchi and Beshir tribesmen all have a similar geometric style.

With their distinctive bright colors, stylized childlike figures and elaborately decorated borders, Caucasian rugs are appealing and simple. Caucasian carpets work well in traditional and contemporary settings and are flexible enough for new or old homes. The simplicity of Caucasian rug patterns makes them easy to work with.  Caucasian rugs are only available as scatter rugs: it is rare to find an example over 6x9ft. The opening of eastern Europe has made available some exciting Caucasian kilims. 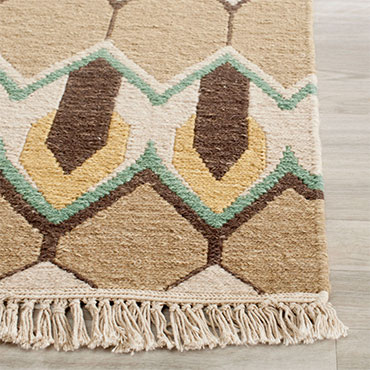 At DesignBiz, we want to make sure you find the finest home furnishings when you browse online. You have searched for caucasian rugs and this page displays all the info, brands, articles, and videos that we have for caucasian rugs. With hundreds of manufacturers and brands to choose from, we want to help you find the perfect solution for your style preferences. Browse through our selection of brands, like Safavieh Rugs, and more. If you aren’t finding the brand of caucasian rugs you are currently searching for, can try our sponsored links below.