Turkoman rugs are handmade in north-western and eastern Iran, parts of Turkey, Turkmenistan, Azerbaijan, Uzbekistan, Syria, and other parts of the Caucasus. They are generally very soft and lush and very similar to one another, and very distinguishable from other Persian rugs. The patterns are normally all-over geometric details, known as 'guls', repeated in straight lines on the field, with the most popular color being a rich burgundy, exclusive to the Turkomans. These guls vary from one tribe to the other, and also appear in the Bokhara pattern of Kashmir where they are often called the 'lucky elephant's foot'. Background colors can also be found in navy blue, black or a series of beiges. These are sometimes referred to as Caucasian carpets.

Turkoman rugs have small, repeating geometric designs and are normally fine quality. The elephant foot and octagonal 'gul' motifs tend to look best in smaller sizes that make the most of the intricate pattern. Turkoman rugs are not the hardest wearing rugs. Turkoman rugs are recommended more for decorative use than high traffic areas. Turkoman rugs usually come in greens, reds, whites, and browns. You'll hear Turkoman rugs referred to as Beshir rugs, Bokhara rugs, or Samarkand rugs. The dying methods used are very similar to those employed by other global weavers and artisans. The use of vegetables, barko, roots and other natural items to make dyes has been a well known art for many thousands of years. Madder root, indigo, St. John's wort, onion, saffron, sumac, chamomile, rhubarb, turmeric, sage, poppy, buckthorn, quince, almond, walnut, chestnut and henna are just a few of the long list of natural dye sources, with madder and indigo perhaps the most commonly used.

But what makes dyeing with natural pigment sources approach the esoteric is the fact that in order to achieve a particular hue of color the elements of the "brew" must be just right or the resulting shade will be "off" from what was intended. This means that at least three fundamental variables - the quality and amount of the dyeing agent, the quality and temperature of the water and the time allotted to soaking - must be correctly proportioned in a particular application to the wool, a material with a set of variable properties of its own. To this already complicated brew yet another ingredient is usually added, namely a fixative, a bonding agent known as "mordant". It is applied to the wool before, often during, and occasionally after dyeing. Known as mordanting, this process has its ancient roots in China and India, reportedly passing to Europe via Persia and Turkey. 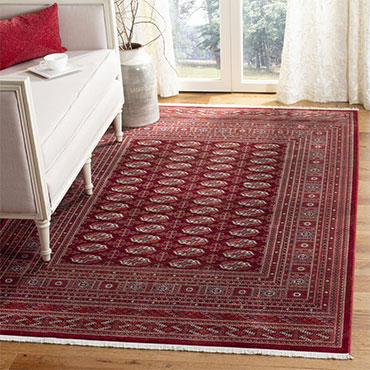 At DesignBiz, we want to make sure you find the finest home furnishings when you browse online. You have searched for turkoman and this page displays all the info, brands, articles, and videos that we have for turkoman. With hundreds of manufacturers and brands to choose from, we want to help you find the perfect solution for your style preferences. Browse through our selection of brands, like Safavieh Rugs, and more. If you aren’t finding the brand of turkoman you are currently searching for, can try our sponsored links below.